Our system is down here at work. So I've been working on audit stuff, checking out craft blogs and working on a spreadsheet. So I have been working. But I'm taking a break. I have a headache, so I'd like to take a nap. Maybe later.

The Great Remodel of 2011 is nearing completion. Here's how it started. During the Snowpocalypse or SNO-M-G, or whatever other stupid title you want to give it, I started to peel the wallpaper off the bathroom walls. This has been something I've wanted to do for ages. It wasn't super ugly or anything. I just didn't like it. And most of the corners had started to peel anyway. And the kids had started to pull off what they could reach (with only a little encouragement from me). We were snowed in, so what else did I have to do?

Sometime last fall, my husband talked to his brother-in-law about ordering new windows for the bedrooms. I was not in on this, though I know he wanted to do it. In the midst of a discussion about the paint color for the bathroom, it became a "let's go ahead and do the bedroom" discussion. That was his project, though. I stuck to the bathroom.

He started last Sunday, after a crazy trip to Menards on Saturday night (talk about date night). Last night, we (finally) got paint on the bathroom walls. He might have done another coat today. I'm not sure what his plan is. I got to pick out the color for the bedroom because he decided he didn't care. Which, ultimately, leaves him open to criticize the color until we decide to paint over it. 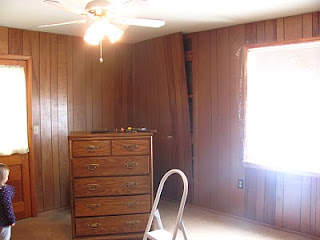 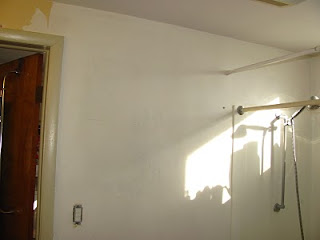 The bathroom before...and after the wallpaper removal 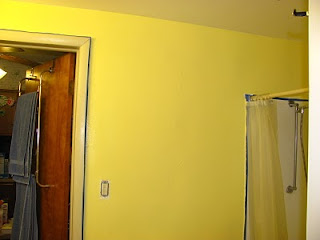 The bathroom after...the lighting isn't very good so it almost looks too yellow 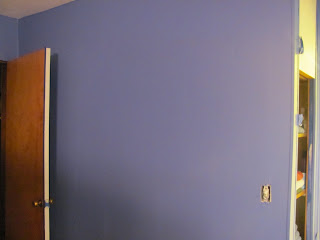 And the pretty blue bedroom
Posted by The Farmers Wife Writes at 3:20 PM